One of the many advantages of being a member of the KAS is access to its library. The book, CD-ROM, and DVD collection is kept on a cart at the Kalamazoo Area Math & Science Center. Items from the library are available for check out at most general meetings. All you need is your current membership card. 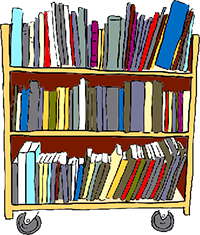 To borrow a book, write the date, your name and phone number on the back of the card in the space provided. Place the card in the black card box. Normally the book will be due at the next meeting. To renew just sign and date the card again. Return the books to the “Return Books Here” area on the cart.

We also have periodicals. Our extensive collection of Astronomy and Sky & Telescope magazines is now kept at a separate storage facility due to space and weight issues. If you would like a specific issue or issues please contact the librarian (details below) at least 48 hours before the next general meeting. To check out a magazine, write the date, name, phone and magazine name and date on the Magazine Check out Sheet on the cart.

We welcome additions, especially newer books on any aspect of astronomy, space science, or space exploration. Our magazine holdings are listed below. We would like to fill the gaps but don’t want duplicates. If you really need them out of your house we suggest senior centers or senior housing, many of which have reading rooms/libraries. Who knows, maybe a KAS member would want to add them to their collection.

Comments and suggestions are always welcome.

For more information or to reserve a library items, please contact:

All About Telescopes
by Sam Brown (1985 edition)

The A-Z of Astronomy
by Patrick Moore

The Beginners Guide to the Skies: A Month by Month Handbook for Star Gazers and Planet Watchers
by Clarence H. Cleminshaw (1977)

Binoculars and All Purpose Telescopes
by Dr. Henry Paul

Build Your Own Telescope
by Richard Berry (1985)

How and Why to Make A User-Friendly Sidewalk Telescope
by John L. Dobson (1991, plywood-bound edition)

NightWatch: An Equinox Guide to Viewing the Universe
by Terence Dickinson (1983)

NightWatch: A Practical Guide to Viewing the Universe
by Terence Dickinson (2006, Fourth Edition)

Observe and Understand the Stars
by Arnold R. Johnson

Seeing and Believing: How the Telescope Opened Our Eyes and Minds to the Heavens
by Richard Panek (1998)

Touring the Universe through Binoculars
by Phil Harrington (1990)


A Star Called the Sun
by George Gamow

Black Holes: The End of the Universe
by John Taylor

The First Three Minutes: A Modern View of the Origin of the Universe
by Steven Weinberg

Red Giants and White Dwarfs
by Robert Jastrow (a classic)

The Red Limit: The Search for the Edge of the Universe
by Timothy Ferris (1977)

The Structure of the Universe
by Evry L. Schatzman

The Unity of the Universe
by Dennis William Sciama


America’s Next Decade in Space
published by NASA (1969)

Bad Astronomy: Misconceptions and Misuses, from Astrology to the Moon Landing "Hoax"
by Philip Plait (2002)

Concepts of the Universe
by Paul W. Hodge

Exploring the Universe
by Louise B. Young (Editor)

The Galactic Club: Intelligent Life in the Universe
by Ronald N. Bracewell (1974)

Our Changing Universe: the New Astronomy
by John R. Gribbin

Pictorial Guide to the Stars
by Henry C. King

Sun Moon Earth: The History of Solar Eclipses from Omens of Doom to Einstein and Exoplanets
by Tyler Nordgren

Voices from the Sky
by Arthur C. Clarke

The Star Gazer: A Novel of Galileo
by Zsolt DeHarsanyi

Introduction to Astronomy
by Dean B. McLaughlin (1961)


400 Years of the Telescope
A Journey of Science, Technology and Thought, 60 minutes, 2009

A Sidewalk Astronomer
About astronomy, cosmology, and John Dobson, 78 minutes, 2005

Explorer 1: Beginnings of the Space Age
Follow the story of how the U.S. entered the Space Age, Produced by JPL

Ring World
NASA/JPL program on the Cassini mission to Saturn, 2004

Ring World 2
NASA/JPL revision on the Cassini mission to Saturn, 2005

The Universe at Your Fingertips: An Astronomy Activity and Resource Notebook
A Publication of Project Astro & the Astronomical Society of the Pacific
Edited by Andrew Fraknoi


A Chart of the Heavens
Hansen Planetarium (1968, map)