The Leonard James Ashby Telescope is the third telescope to be housed within Owl Observatory, our 12’ x 12’ roll-off roof facility at the Kalamazoo Nature Center. It was named after the gentleman that founded our organization in 1936 and served as its first president. Initial installation began in September 2019. It was entirely funded by generous contributions from KAS members and through the sale of Eclipse Shades. Everyone is invited to view planetary and celestial wonders through the telescope during our Public Observing Sessions, held twice-a-month from April through October. At all other times, KAS members, upon the completion of a training class, will have the opportunity to use the telescope for their observing, research, and imaging projects. 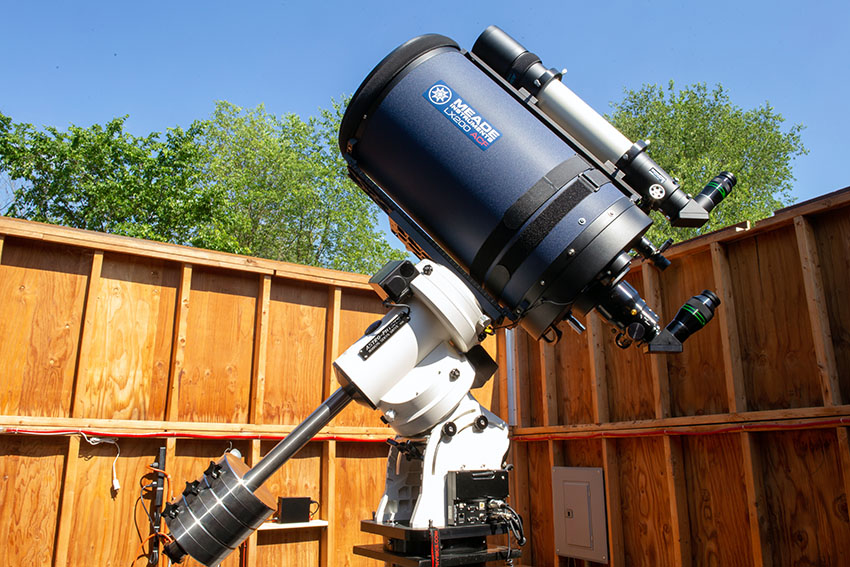 The Leonard James Ashby Telescope is composed of two instruments. The largest is a 16-inch f/10 Schmidt-Cassegrain telescope (SCT) built by Meade Instruments. Debuting in the 1960s, SCTs have become very popular among amateur astronomers and small observatories since they are compact for their given aperture. Indeed, the 16-inch from Meade is the largest SCT commercially available today and the largest aperture that can comfortably fit within Owl Observatory and still have room for members, students, and the public.

To avoid the image shift that is common to Schmidt-Cassegrains, we have opted for a Starlight Instruments 3-inch Dual Speed Feather Touch Focuser for ultimate performance. Feather Touch focusers boast ultra-smooth course and fine focus knobs which result in absolutely zero-image shift or slippage while focusing. The Feather Touch can also handle up to 17-lbs of weight, meaning it can accommodate any eyepiece or camera with ease. 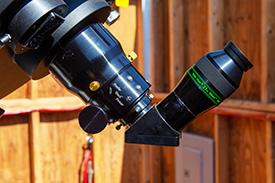 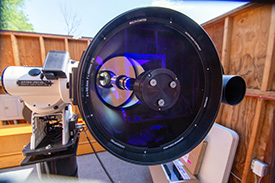 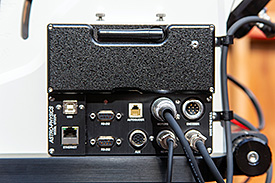 At a focal length of 4,064mm, the 16-inch’s field-of-view is too narrow to view or image extended objects like the Pleiades cluster (M45) or Andromeda Galaxy (M31). This is just one of the many reasons we chose the Tele Vue NP101is telescope to complement our SCT. The NP101 is a 4-inch (101mm) f/5.4 Nagler-Petzval apochromatic refractor. It contains four elements in all, which result in a flat-field and views free of color aberrations that plague lesser refracting telescopes. The “is” designation (in NP101is) denotes the instrument is a capable “Imaging System.” It is also an exemplary wide field and planetary visual telescope. The NP101 also includes a Focusmate 2.4-inch dual-speed 10:1 focuser, which ensures this fine telescope realizes its full potential.

Both telescopes ride atop the Astro-Physics 1600GTO German Equatorial Mount. The 1600GTO is built from the ground up to be a precision observing and imaging platform while still remaining totally user-friendly. It has a total instrument capacity of 220-lbs. Combined, our two telescopes weigh approximately 80-lbs, so the 1600GTO ensures an ultra-stable platform. Its rugged design allows it to track and guide well past the meridian. This will allow members to perform a long series of exposures without stopping in the middle to flip sides. Periodic error for this mount is ±2.5 arc seconds thanks to the high-quality Swiss DC servo motors that drive the mount. The mount can be controlled via the GTO Keypad or wirelessly using the observatory’s laptop computer loaded with Software Bisque’s TheSkyX. 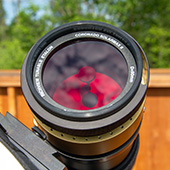 Owl Observatory can be in use day or night thanks to our Coronado H-alpha filter! It threads directly onto the Tele Vue NP101 and allows us to view the Sun at a wavelength of 656.28 nm (referred to as hydrogen-alpha). At this wavelength we can view solar phenomena like prominences, filaments, spicules, and even the occasional solar flare on a layer of the Sun known as the chromosphere. 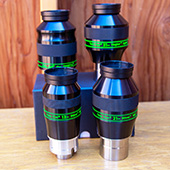 Eyepieces from Tele Vue are among the best available today. Our current collection includes the 41mm Panoptic, 31mm Nagler Type 5, 21mm Ethos, and 13mm Ethos. These give a wide range of magnification with our two telescopes. Their apparent fields-of-view range from 68° for the Panoptic, 82° for the Nagler, and a staggering 100° for the top-of-the-line Ethos eyepieces. Viewing through them is like staring out the porthole of a starship! 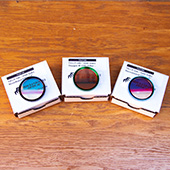 Our collection of 2-inch Thousand Oaks Deep Sky Filters include the Broadband, Oxygen-III (OIII), and Narrowband. The broadband is designed to help reduce light pollution (a necessity at the Nature Center). The OIII filter helps reveal detail in planetary nebulae such as the Dumbbell Nebula, while the narrowband filter increases contrast in diffuse nebulae like the Veil or Orion Nebula. 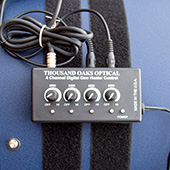 Michigan is a very dewy place! Therefore, a good dew prevention system is an absolute must. We chose the Thousand Oaks Dew Controller since it has four channels that can be set independently of one another - really handy considering the difference in aperture between our two main telescopes (not to mention the finderscope). Dew straps come from Astrozap and Kendrick Astro Instruments. 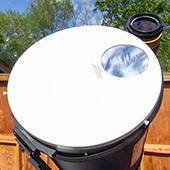 The off-axis solar filter from Kendrick Astro Instruments has a clear aperture of 114mm (4.5-inches). The solar filter material is manufactured by Baader Planetarium and permits safe white light views of the photosphere, the layer of the Sun we can see. This is where phenomena like sunspots and solar granulation are visible. It fits over the front of the 16-inch SCT and compliments the H-alpha filter used on the Tele Vue refractor. 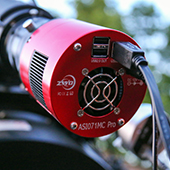 This camera uses Sony's IMX071 CMOS sensor and has a resolution of 16 Megapixels (4944 x 3284). Unlike a DSLR camera, it has a two-stage thermoelectric cooling system that allows deep cooling for noise reduction and greater sensitivity. We use Sequence Generator Pro to control the camera for deep sky imaging. Optolong 2-inch L-Pro and L-eNhance filters are also provided to block out light pollution from Kalamazoo. 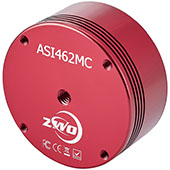 This camera uses Sony's IMX462 CMOS sensor and has a resolution of 2.1 Megapixels (1936 x 1096). We use FireCapture to control the camera for solar and planetary imaging. We also use a Baader UV/IR-Pass filter to reflect infrared energy to protect the camera's sensor and increase contract. A ZWO Atmospheric Dispersion Corrector is also supplied to adjust color separation caused by atmospheric conditions.

Mr. Ashby was born on December 1, 1891 in Oldham, Lancashire, England and later moved to Southsea, Portsmouth. In his youth he apprenticed himself to a textile mill operator, and from 1903 to 1913 he studied nights and in his free time at the Oldham 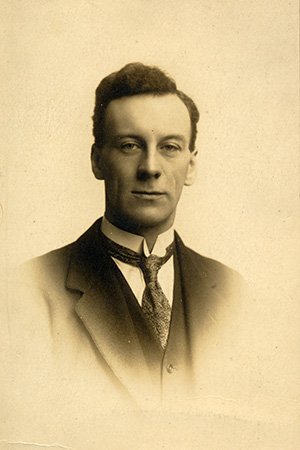 Technical School. In 1911 he won a scholarship to Manchester University and continued between terms his studies at the Oldham Technical School. In 1912 he won a medal, one of 20 so honored in an empire contest, called in English phraseology the Whitworth Exhibition. His Bachelor of Science degree, with honors, in engineering was obtained from Manchester University in 1915.

Enlisting in the British army in 1915, Mr. Ashby later became a lieutenant of the Royal Corps of Signals with service in France. While on leave, one of his former professors at Manchester University suggested he transfer to the Royal Navy as the school of mines was looking for someone with his training. From then until the end of World War I and in fact until 1920, Ashby designed mines, and supervised manufacturing operations when the industrial concerns got into difficulties.

Mr. Ashby married Nona Gwendoline Wormald, of Oldham, in Crowborough, Sussex on January 15, 1916. Perhaps their mutual interest in the same sport brought them together. Both were Olympic-class fencers. Apparently, they even qualified for the Olympic Games, but Mr. Ashby was wounded (stabbed) during practice and unable to compete.

The happy couple immigrated to the United States in June 1920. Settling in Kalamazoo, Mr. Ashby applied and obtained an appointment to the faculty of Kalamazoo College in 1921, where an engineering department was contemplated. That failed to develop, and he taught physics for three years. While at K-College, Mr. Ashby built and operated the first broadcasting station in the city. The radio station, WOAP, opened on January 3, 1923. Mr. Ashby left Kalamazoo College in 1924, which brought about the end of WOAP. With his teaching career now behind him, Ashby decided to start his own refrigeration installation business. 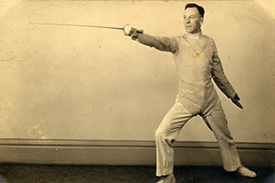 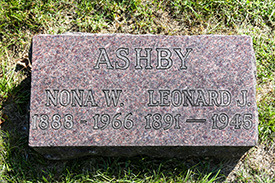 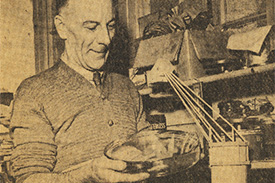 Like most amateur astronomers of his time, Mr. Ashby was also an amateur telescope maker (ATM) by necessity. Commercially made telescopes were quite expensive during this period. It should come as no surprise that Mr. Ashby, with his degree in engineering, had a completely equipped workshop in his basement. Even though telescope making was the rule of the day, Ashby shared his thoughts on the hobby in an interview with the Kalamazoo Gazette that would resonate with any ATMer active today:


That’s the fun of it. Anyone can buy the things he wants to use, but to see them grow under his hands, that’s the real kick in it. Then when he puts the machine together and it works, it’s the thrill of a lifetime, repeated every time he does it.

Mr. Ashby also constructed an observatory in the top of his garage. A section of the garage’s roof slid back on rails to expose his telescope on the sky. Many of the earliest gatherings of the Kalamazoo Amateur Astronomical Association were held in “Ashby Observatory.”

In 1940, the Ashby’s moved to Ann Arbor where Mr. Ashby became a student at the University of Michigan and worked as a Special Instructor of Physics from 1943 – 1944. He died unexpectedly on June 12, 1945 at the age of 53. All members of the Ashby Family are buried at Mountain Home Cemetery in Kalamazoo.